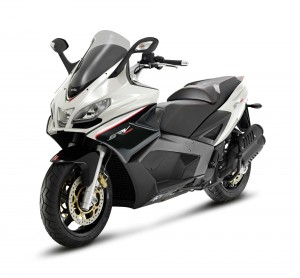 Aprilia have released their official video for the monster scooter known as the SRV850 (shown below).

With an 850cc fuel-injected 90° V-Twin engine producing 79 horsepower, this scooter surely holds the accolade for the most powerful production scooter on the market.

While I have no doubt it is a remarkable machine – which I would love to spend a day on, It does, however, cause me to pause and wonder: is it actually still a scooter in the generally accepted meaning of the term?

While writing my recent book, [Buying Your First Scooter][1], I had to make an attempt to define what a scooter actually was, because the lines are beginning to be increasingly blurred.

Here is what I came up with (quoted from the book):

I may have added to that list that they generally have smaller engine sizes than motorcycles.

The item on that list that comes first is the fact that it has a “step-through” design. It was first on that list for a reason. Personally, I feel that the SRV 850 would be not so much a “step-though” as a “stumble-onto” design.

I feel I would be at a loss to decide whether to swing my leg rearward as I would on a regular motorcycle, or do the one-legged hop with right leg extended like a half-maimed flamingo.

I also have to wonder whether – once the engine and power characteristics reach this level – it is actually still a scooter, or merely a slightly differently configured automatic bike?

Now, I understand that scooters with a larger than average step-through portion are nothing new – witness the fine Suzuki Burgman and even the Genuine Scooter Company’s Blur, but this trend to push the boundaries of traditional scooters is causing me to question the point at which a scooter becomes a motorcycle even more.

Don’t get me wrong, I welcome the progress in the scooter world, and think that little but good for us all can come out of it, but it does keep forcing that question on me: When does a scooter become a motorcycle?

I would welcome your thoughts on this. Do you consider this a scooter? would you buy one? The comment thread is open!

I hope you find these posts useful. If you do, please consider supporting, while gaining access to all this information, and more, by purchasing: Proficient Scootering - The comprehensive guide to safe, efficient and enjoyable scooter riding. It's available for all e-readers and in print.
←Throttle Sense ScootSafely.com at Vespa Marietta this Saturday. Atlanta, GA.→