Today, I’m going to continue on with part two of the series about positioning.

In Positioning – Part 1, I mostly talked about positioning where it affects our view, visibility, and therefore safety, when travelling in a straight line. I purposely avoided talking about cornering because it is deserved a whole post of its own. This is the post!

What I’m about to relate here truly was a “Eureka!” moment for me when I first started my advanced motorcycle training back in the 90’s.

I could not believe that I had been riding all those years – completely unaware of how much view and visibility was “there for the taking” – and I was not taking it.

It transformed my riding, and made it a much more relaxing occupation because, suddenly, I was seeing hazards – and potential hazards – literally seconds before I had been seeing them previously. It was as if I had been given a crystal ball to see into the future – and I was very excited!

I have been busy for a few days preparing diagrams and photographs for this post because it is something that is best described graphically. So, let me introduce positioning for corners.

The thing that was such an eye-opener for me when I was first shown these techniques was that simply by altering my position in the road when approaching corners, I was able to see sometimes hundreds of yards further round the bend! 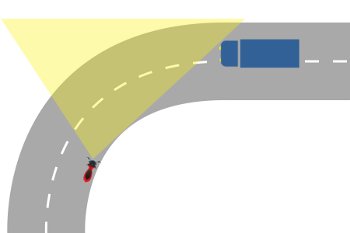 Take a look at the this diagram. Here, I am starting to negotiate a right-hand corner. I am toward the right part of my lane. The yellow area shows what I am able to see from that vantage point.

I am about to get a little surprise because there is a large truck encroaching on my lane. I can’t see it.

Now, although this example shows a truck encroaching on my lane, it could just as easily be a crash on my side of the road, a stopped vehicle, a boulder… anything. If it’s outside of that yellow area, I won’t see it. 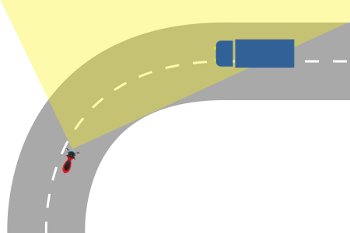 Now, in this diagram, the only thing that has changed is that I am now riding to the left of my lane.

Take a look at the yellow area. Can you see how much more view I have round the corner?

This example demonstrates the effect on a reasonably narrow road. You will find that the wider the road, the more pronounced the extra view – and visibility that can be gained.

Incidentally, when I talk about view and visibility, view is how well you can see hazards or potential hazards ahead, visibility is how well others can see you.

An ideal technique is one that markedly increases both. This is one such technique.

Now, let’s look at this from the opposite perspective – when negotiating a left-hand bend. 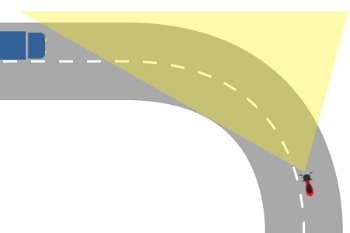 In this scenario, I am starting to negotiate a left-hand bend. There is a truck completely on my side of the road (something you often find on twisty roads).

Unfortunately, I’m riding to the left of my lane, and I’m about to get quite a shock because by the time I see the truck, it’s going to be pretty close! 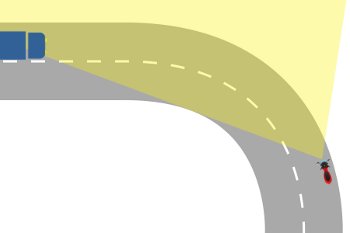 In this diagram, nothing has changed, except that I am now riding toward the right of my lane.

Again, I have much more visibility into, and around, the bend. I am also visible to the truck at a much earlier time.

You can see that, by the simple action of shifting your position in your lane, you can gain a huge advantage in what you can see, and how well others can see you.

This is an advantage us on two wheels have over the “more-wheeled” variety. It would make sense for us to use it to its maximum.

Let me address here a couple of observations that people sometime make about positioning like this:

“I don’t want to be riding on the middle lines when I’m on a right-hand bend. Someone could be coming the other way.”

Yes, someone could indeed be coming the other way, and that’s the point. By being in the best part of the road, you get to see that vehicle much earlier – and they get to see you.

If/when you see a vehicle coming from the opposite direction, it is a simple matter of following the golden rule: Always give up positioning for safety. Because you can see the hazard much earlier, it is all taken in your stride, and you smoothly alter your position to create the buffer zone.

“I don’t want to be riding in the right of my lane on a left-hand bend. That’s where all the gravel is.”

That is a valid concern. I ride all the time up in the mountains of North Georgia, USA. One of the hazards we often face is the gravel and grit they use to make the roads “safer” (they obviously don’t think about scooters or motorcycles when they do that).

I find that unless you are actually right about to go off of the edge of the road, the extremes of the lane are often the cleanest because that’s exactly where cars’ wheels travel. They clean it for you!

However, just like any riding technique, there are no hard-and-fast rules to be adhered to blindly. Everything you do is a combination of multiple factors and concerns. If one of those concerns is a bad road surface, then, you guessed it, give up your positioning for safety.

Of course. giving yourself the best advantage by judicious positioning in a curve allows you to see those hazard sooner!

I often hear this from people who have done some track days on motorcycles. The ideal line for negotiating a corner on the road is similar, but not the same, as the “racing line”. We are not “apexing” at all. We are describing a gentle curve which exceeds the radius of the curve we are following. I will discuss this in much more detail in a later post.

“Always give up positioning for safety!”

So, to sum up, the ideal position for view and visibility when negotiating a right-hand bend is in the left part of your lane. The further left you can be, the more you will be able to see round the bend.

The ideal position for view and visibility when negotiating a left-hand bend is in the right part of your lane. The further right you can be, the more you will be able to see round the bend.

(Of course, these rules are reversed for those of us who drive on the left, the UK, for instance).

I will leave you with a couple of real-life examples. I elicited the help of my friend, Paul (thanks Paul),  to see if we could capture the extra view you can achieve with positioning in photographic form: 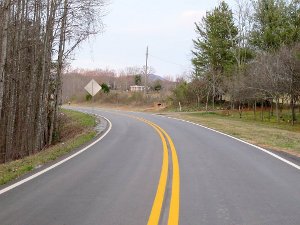 Here I am standing in the left of the lane on a left-hand bend. I can see very little of the road ahead. I cannot see what the road does after that first left turn. I can see no other vehicles. 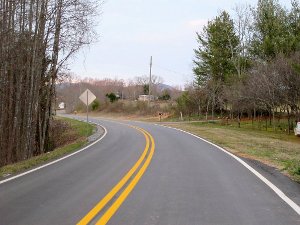 Here, I have moved to the middle of the lane. I can see a little more of the path the road is following, although I haven’t really gained that much. I still see no oncoming vehicles. 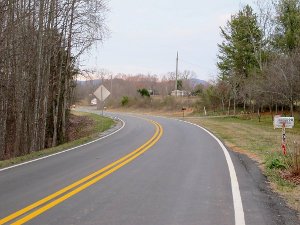 Now, I have moved to the right of my lane. From this vantage point, I can now see that the road veers right again after this curve. I can also see the motorcycle that was previously not visible to me in the distance.

Please note: The lane where I was standing was only eight feet wide. This means that every time I changed position, there was only a four feet difference, yet it made a large difference in what I could see, and only when I was in the right of my lane could I see the motorcycle coming from the opposite direction. On larger roads with wider lanes, the effect will be even more pronounced.

One last thing (and I apologise for the length of this post): This may sound obvious, but all techniques – particular positioning – should only be used when they will actually gain you an advantage.

If, for just one example, you are on a left-hand bend, but the road goes over the brow of a hill, you’re not going to see anything more by moving your position. Nothing is to be gained.

Like most things about good roadcraft, techniques and actions should be considered, not learned and practised by rote.

Well, that about wraps up positioning in curves. I hope you have found it useful. In later posts we will be revisiting positioning again.

Until then, Scoot Safely!

I hope you find these posts useful. If you do, please consider supporting, while gaining access to all this information, and more, by purchasing: Proficient Scootering - The comprehensive guide to safe, efficient and enjoyable scooter riding. It's available for all e-readers and in print.
←Buying Your First Scooter ScootSafely’s First E-book!→