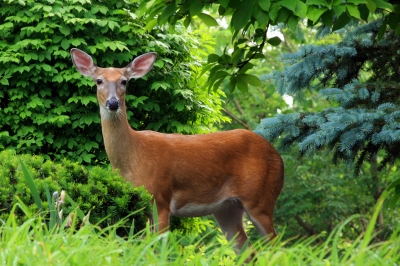 There was a definite unfamiliar chill to the  air this morning. It reminds me that glorious summer is preparing to give way to spectacular fall.

Even for the “fair weather riders” amongst us, there are still plenty of great riding days ahead. Sadly, along with the spectacular show that mother nature provides for us each year, she brings a heightened danger from our wood-dwelling fauna — most notably the deer.

The NHSA, in the US, estimates that there are 1.5 million crashes annually with deer in the US alone. 10,000 injuries, and 175-200 fatalities. Even more disquieting for us riders is the estimation that over 74% of motorcycle-deer collisions result in injury to the rider.

They are depressing statistics indeed, and the situation is only getting worse as we encroach more on and more on the deer’s habitat. With that in mind, I’d like to talk about what we can do to better the odds with capricious Bambi.

As with any wildlife encounter, there is little we can do to predict when an encounter will occur, but there are some things we can keep in mind about deer habits that may go some way to know when we are most at risk.

Personally, having hit a deer at 65 MPH (the deer died and I managed to stay upright with little more than a bruised leg, and $1,500 repair bill), I prefer to take no chances with them. I would recommend taking the following precautions:

Unfortunately, deer are an extremely unpredictable animal. They seem to react more to proximity than to noise and lights. This means that they will often seem unfazed by your presence until you are very close to them, at which point, they will launch into action, and begin the familiar zig-zag patten of avoidance. Sadly, that evasive action is very often directly into your path. Nobody said they are the smartest animal!

I have sometimes had success with sounding my horn to prompt them into movement from a distance, but this certainly cannot be relied upon. Because of their unpredictability, I tend to brake, and slow to a walking pace, or even stop, upon first spotting one.

Let’s hope it never comes to a collision, but it’s worth here discussing a couple of points about strategies if a collision is imminent. If a collision with a deer seems unavoidable, it is best to hit it straight-on. If you can swerve to avoid it without encroaching into oncoming traffic, then it is worth a try. This is where your well-practised skill with [steering][4] — and particularly counter-steering — will come into play. When it comes to the actual impact, though, I would hit it when upright, and release your brakes momentarily before impact.

I hope you find these posts useful. If you do, please consider supporting, while gaining access to all this information, and more, by purchasing: Proficient Scootering - The comprehensive guide to safe, efficient and enjoyable scooter riding. It's available for all e-readers and in print.
←A Big Thank You To My Readers The Print Version of “Proficient Scootering” is Here!→