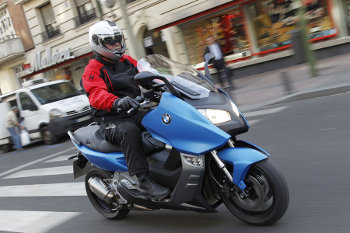 Today, I’d like to talk a little about really honing our powers of observation:

Observations skills (and the use we make of the information gathered during observation) are arguably the most important skills we have to help us stay safe out there on our scooters.

Imagine a scenario where two riders encounter the same situation while doing their daily commute. For our purposes it could be any hazard situation. Let’s say – a car suddenly coming over the brow of a hill encroaching on your side of the road.

(Actually, I’m using this example because it’s a real-life situation that cropped up while I was taking my advanced motorcycle test).

For one rider, it’s a complete non-event. For the other, it’s a panic stricken, stressful moment. How could that be so?

The first thing that the rider A knew was that suddenly there was a car coming towards them on their side of the road.

Here’s what happened for rider B:

As he was riding up the hill, he noticed that there was someone walking a dog on the pavement/sidewalk on the other side of the road. So what, huh?

Well, rider B surmised that it’s entirely possible that the dog could suddenly put his head into the roadway. If the dog did that, then a vehicle coming over that hill could swerve to avoid the dog.

So, what did rider B do? He gave up his normal position, and moved to the opposite side of his lane just in case that should happen. Ultimately, that is exactly what did happen! When the car did appear over the brow of the hill – encroaching on rider B’s side of the road, it was pretty much a non-event.

What rider B did there was make an excellent use of an observation link.

Opportunities for observation links such as that outlined above surround us all the time. Learning to recognise them, pay attention to them, and act on them can make a huge difference to your riding.

Ultimately, it will make your riding a much more relaxing occupation simply because you’re avoiding many, many potentially hazardous situations before they have even developed.

Let me give you some examples of more basic observation links here, and hopefully it will stimulate you to come up with your own: 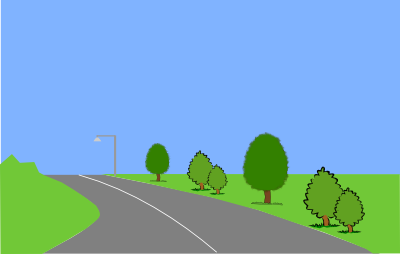 Here, a single lamp-post in the distance could indicate a junction you cannot see as yet. 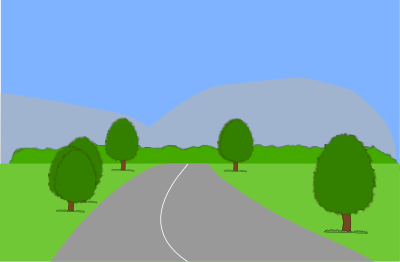 Here, the unbroken line of trees or hedges in the distance would suggest a turn coming up (you obviously can’t ride straight through the trees). 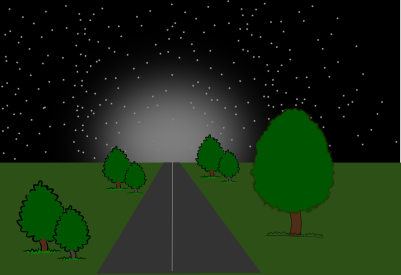 Here, the glow of light in the distance suggests you are entering a built-up area, or are coming up on a more heavily used facility, such as a gas station.

Be on the lookout for the resultant traffic.

Here are some more examples where making observation links can help immensely with your riding:

These are just a few of endless possibilities to use observation links to your advantage. You can see that what we’re trying to here is to enhance our observation skill from merely observing hazards that are occurring immediately, to applying intelligent thought to that which you see – to enable you to avoid hazards even before they present themselves to you.

Next time you’re out riding, try to come up with some of your own. You may be surprised how many you can come up with – and it’s a interesting exercise.

I hope you find these posts useful. If you do, please consider supporting, while gaining access to all this information, and more, by purchasing: Proficient Scootering - The comprehensive guide to safe, efficient and enjoyable scooter riding. It's available for all e-readers and in print.
←Domino’s Pizza in the Netherlands Comes Up With a Unique Solution to Quiet Electric Scooters A Word to Car Drivers→