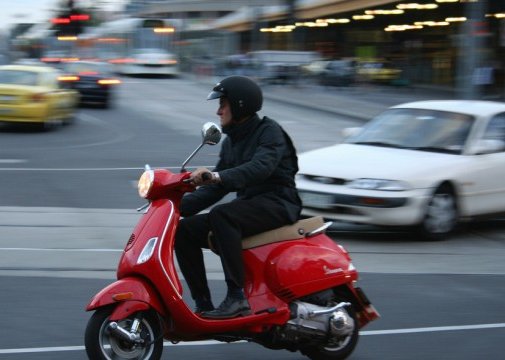 Overtaking and passing. These are both terms meaning the same thing – depending on your local lexicon, but they both refer to the act of getting past a vehicle that is going slower than you intend to ride yourself.

For consistency, I will use the term “overtaking” in this article.

I have purposely left the subject of passing/overtaking until later in my series of posts.

This is because, with our (generally) lower-powered scooters, it is something that requires a lot more forethought and planning than it would, say, in a car, or on a higher powered motorcycle.

Now, there are some who would never dream of executing a passing manoeuvre on a scooter, but passing on a scooter is perfectly valid and even sometimes necessary no matter how much you may try to avoid it. So, let’s talk about doing it in the most efficient, and safe manner possible.

Why does overtaking require so much more planning and forethought for us scooter riders? Because we don’t have the power to get out of trouble should things go awry. For this reason, it needs to be fully planned and skilfully executed from way before you begin the manoeuvre.

It may seem counter-productive, but would you like to know the first thing I do when considering an overtake? I drop back – sometimes way back.

This may seem the opposite of what we want to achieve, but let me outline what we need to plan when considering an overtake, and the reason for dropping back may become clearer.

For a safe overtake we need to:

All of these things are facilitated by dropping back. Most importantly, from this position we get to:

Let me expand on that second point – our comparative lack of acceleration: You will often see drivers and riders sitting closely behind a vehicle they are just about to overtake. Indeed, that is often a clue that they are about to do so.

In that situation they are robbing themselves of a good, clear view of the road ahead. How many times do you see these people start to pass, then abort when something they have missed suddenly comes into their view?

Secondly, when they go to pass, they will need all the acceleration they can get from their machine because, relative to the car in front, they are starting from zero. Both vehicles are going at the same speed.

We don’t have that much acceleration at our command, and we certainly don’t want to be performing an overtake in that manner anyway.

So, what do we do? We start the manoeuvre from way back.

By the time we reach the vehicle we’re about to pass, we have already achieved the necessary speed differential to smoothly get past them. No frantic acceleration necessary.

Now, this technique does come at a price. It means that we need to plan this manoeuvre much, much further ahead. That is why I stated at the beginning of this article that passing for us requires much more forethought and planning.

I will add to that list that it also requires much more consideration.

In the following images, I will outline the steps for a carefully planned and executed overtake:

Here, I am following a car which I intend to overtake. At this proximity, I can’t get enough information about the road ahead. My view is obscured by the car I’m about to overtake.

Also, if I were to initiate the pass from here, it would require a lot of acceleration to get past the car.

To gain a better view of the road ahead, I have dropped back considerably.

From this position, I can see much further ahead and plan my overtake.

I am:
If I need to shift toward the left or right of my lane to get an even better view, I will do so – as long as it doesn’t bring me into conflict with oncoming traffic.

Having made careful observations and planned all the points of the overtake, the process begins.

I have already picked my “re-entry” point.

I begin to accelerate. The objective is to arrive at the point where I move out to pass at a sufficient speed to smoothly execute the manoeuvre without asking too much of my machine. 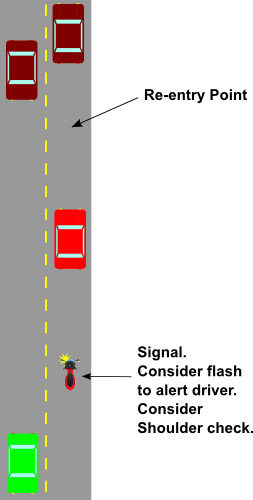 As I approach the vehicle in front, I put on a turn signal. I consider giving a flash of my lights, or a brief sound of my horn, to alert the driver that I am about to overtake.

Note that it is not necessary for the last vehicle coming in the opposite direction to have cleared at this point. As long as they will have cleared by the time I begin to move out.

I am still on my side of the road, and perfectly able to abort the overtake should circumstances change.

I am continually practising the IPSA and TUG methodologies as outlined in this article, so, at any point, circumstances may dictate I re-evaluate the manoeuvre.

I have now moved out to pass. Note that I’m not being timid about my positioning, and am using the opposite lane to my advantage by not passing too close to the vehicle in front.

There are a couple of reasons for this: firstly, I want to create a “buffer zone” between myself and the car I am passing and, secondly, It affords me a better view of what is happening up ahead. From this position, I could see if, for instance, a vehicle up ahead shows a turn signal.

The worst-case scenario being a left-turn signal! Not seeing this has caused many unfortunate incidents for some people.

This clearly is the most dangerous point of the manoeuvre. Don’t linger out there. Get past. Keep observing. Remember TUG. Take information, use information and give information. 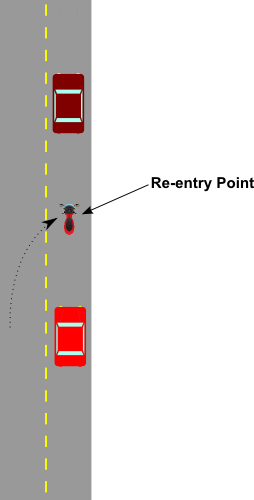 Having passed the vehicle, I smoothly head for my re-entry point.

Now,  this is a fine example of using throttle sense. If I need to brake, I was going too fast, or I didn’t allow a big enough gap for my re-entry.

I should be able to smoothly adjust the throttle, and re-join the flow of traffic – at their speed – without needing to brake, or causing any of the vehicles around me to take action.

A well-planned and skilfully executed overtake is a thing of beauty (OK, I may need to get out more).

Like most things in good, skilled riding, the keyword is “smooth”. Further, our objective is to execute the overtake while leaving no “footprint”. In other words, if we cause any other vehicle to take action because of it, we have failed.

Let me leave you now with some final points about overtaking:

Until next time, scoot safely!

I hope you find these posts useful. If you do, please consider supporting, while gaining access to all this information, and more, by purchasing: Proficient Scootering - The comprehensive guide to safe, efficient and enjoyable scooter riding. It's available for all e-readers and in print.
←ScootSafely.com at Vespa Marietta this Saturday. Atlanta, GA. Maryland May Soon Require License, Tag and Insurance for 50cc Scooters→