Group Riding and the Marker System 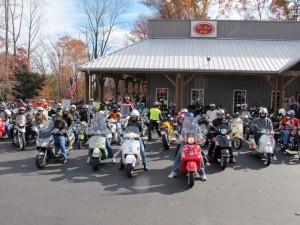 With the onset of spring, and the great riding weather we’re all looking forward to, my thoughts have turned to the many arranged group rides which will be taking place all over the world.

Riding in groups is a great way to enjoy our scooters, and I always find that the scooter community is an extremely friendly and sociable group of people. Group riding can be a lot of fun.

However, my experience has been that group riding continues to be one of the more dangerous activities we can participate in with scooters and motorcycles.

Why should this be so? I would imagine that the following things contribute to this phenomenon:

With this in mind, I would like to present some tips about riding in groups, and also present a “fool-proof” method for ensuring that nobody gets lost – while still being able to ride at their own pace.

Let’s start with some important tips for group riding:

Ride Your Own Ride

It’s especially important to remember on a group ride that, even though you’re riding with many other riders, each is responsible for their own ride; their own manoeuvres, and their own decisions.

Never be tempted to follow another rider in any manoeuvre – even if they signal to you that it’s safe to do so (see false signals. What may be perfectly safe for the leading rider to do, may spell disaster for another rider who follows.

Similarly, I would refrain from giving such signals to others in your group. This particularly applies when passing other vehicles.

Ride at Your Own Pace

This is probably the number one problem with group riding. It is human nature that if a rider is starting to feel as if they may be left behind, they will try to pick up their pace.

That, combined with the unfamiliar territory, and the close proximity of riders behind can easily create the “perfect storm” which could ruin everybody’s day.

If you are dropping behind too much, the other riders can choose to pass you if they wish. Don’t be tempted to ride above your comfort level in an attempt to keep up.

It is human nature to do so, but it is wiser to make a determined effort to avoid the temptation.

The “marker system”, which I will outline later in this post, will allow you to ride at a pace which is perfectly comfortable for you without the danger of getting lost.

It is extra important to maintain a safe following distance in a group ride. A lot can go wrong, and any problems can easily take on a “domino effect” in groups.

However, you can limit the length of the group while still maintaining a good following distance by staggering the line when riding in a straight line.

Now, although riding in a staggered formation has its benefits in terms of keeping the group together, I don’t think it should take precedence over positioning and visibility.

(If the preceding paragraph doesn’t make sense, please read my post about positioning – particularly where cornering is concerned).

As can be seen, this in itself will mean that there are times when our comfortable staggered following position is disrupted, so it is important not to get too close in the formation.

If another rider is getting too close behind you, don’t be tempted to speed up and give up your following distance. If anything, this scenario would demand that you slow down to be able to provide his/her following distance in front of you. If the following rider is not happy with this, then it’s his/her option to pass if they wish.

It is tempting – when riding in a group – to become “hypnotised” and find that you’re mostly concentrating on the rider in front; following their manoeuvres; matching their speed through the curves, and so on. If you do this, you can also end up matching their mistakes, and sharing the consequences of them.

Keeping in the spirit of “riding your own ride”, try to ride as if you are riding on your own. This means that your observations should be way ahead. Your rear observations (mirror work) should be just as – or even more – vigilant as ever.

Without making the whole affair too “regimented”, it is often a good idea – at the beginning of a group ride – to conduct an informal briefing during which the protocols for the ride; the approximate route, formation riding, contingencies in the event of a rider getting lost, and so on, are discussed.

This will ensure that there should be no surprises.

As can be seen, group riding can be fraught with extra hazards, but, if extra vigilance is maintained, they can be a very enjoyable experience.

How do we all stay together? The Marker System

And so, we come to the perennial question concerning group riding: How do we keep so many riders – with widely varying experience levels – together?

I have experienced a few different methods over the years, but here I will present my particular favourite. It is my favourite for the following reasons:

There are two key “players” in the marker system:

These “key players” wear some clothing which clearly identifies them. This could be a “dayglo” vest, a particular marking, a flag… Whatever serves the purpose to clearly identify them. Of course, these key players are identified at the “briefing” at the beginning of the group ride.

Here’s how it works: 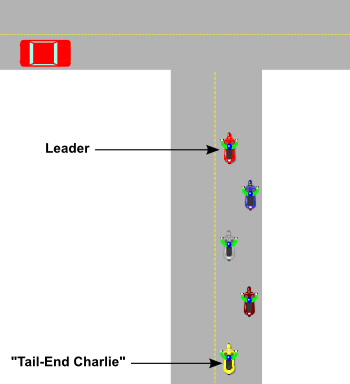 The leader always stays in front. He does not wait for the rest of the group at a junction. “Tail-End Charlie” is always the last rider in the group. 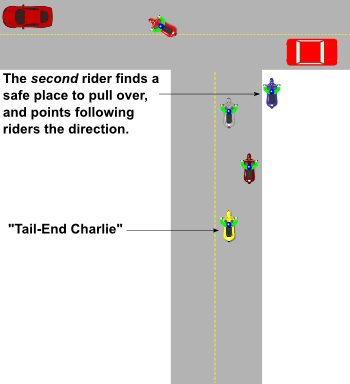 Whenever a change of direction is encountered, such as at a junction, the second  rider in the group finds a safe place to pull over.

From this position, as following riders come along, he/she can then point the direction that the rider has to go.

He/she continues to do this until “Tail-end Charlie” comes along. 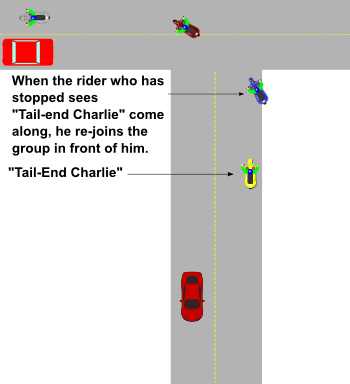 When the rider who has been waiting at the junction sees “Tail-end Charlie” coming along, he/she re-joins the group in front of him. 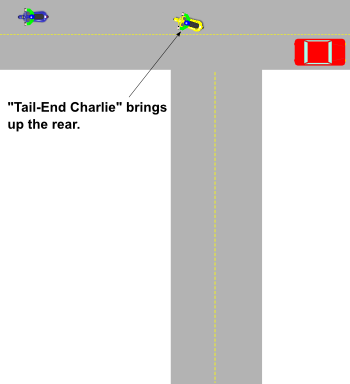 “Tail-end Charlie” then brings up the rear.

As can be seen, using this system is very stress-free for all concerned.

There is no chance of anybody being left behind – no matter how much they have “lagged”. Therefore, there is no obligation for riders to have to ride outside of their comfort zone – or to take unnecessary risks –  to keep together.

This also means that each rider (apart from the leader and “Tail-end Charlie”), gets to  ride in different parts of the group. As the ride continues, the inner core of the group effectively rotates. Sometimes, they’re at the front, and sometimes they’re toward the rear.

Further, this presents no disruption to traffic around the group.

If your group decides to use the marker system, a brief explanation before the ride begins should suffice to let everybody know what to expect.

I hope this has been of some help. I wish you all a very enjoyable and safe summer of riding.

Until next time, scoot safely!

I hope you find these posts useful. If you do, please consider supporting, while gaining access to all this information, and more, by purchasing: Proficient Scootering - The comprehensive guide to safe, efficient and enjoyable scooter riding. It's available for all e-readers and in print.
←Cameron Beaubier – Yamaha Road Racer. Injured Riding a Yamaha Zuma Scooter Honda Announces Two New Scooters for 2013→