OK, it’s admission time. Who goes to YouTube, and watches those “Crash Compilation” videos? Nobody admitting it? Well, OK. I’ll go first. I do!

Now, in my defence, I don’t merely watch them for voyeuristic reasons. I watch them to see if there is anything that can be learned from the mistakes that have been made.

You see, I adamantly refuse to call crashes “accidents”. Very rarely indeed is a crash the result of an accident. OK, maybe the unfortunate soul who is riding along when a rock dislodges from the cliff above, and knocks the hapless individual on his noggin… that could be called an accident. Well, possibly the guy who is riding along, minding his own business when a freak wind blows a carelessly discarded newspaper on to his visor — causing him to lose control as he is desperately trying to see through the sports section… that could be called an accident. But no more! For everything else, there is culpability.

Further, most crashes are the result of a “perfect storm” of two or more occurrences coinciding. Say the result of a rider making the mistake of passing in a junction when a  driver in front turns without signalling. Or the rider going too hot into a turn just when the deer decides to cross the road.

As can be seen, removing just one of the contributing factors from most crashes would have prevented it. Such is the case with the scenario I am talking about today. I mentioned earlier about the YouTube videos that display compilations of crashes. A disturbingly common scene amongst these is the “Traffic Light Gotcha”. It is the result of bad positioning (and often bad lane discipline) on the part of the rider, and the rider’s inability to see the danger in front of them. Observation Links and playing the “What If” game should prevent this happening to you.

So, after all that preamble, let me present: “The Traffic Light Gotcha”. 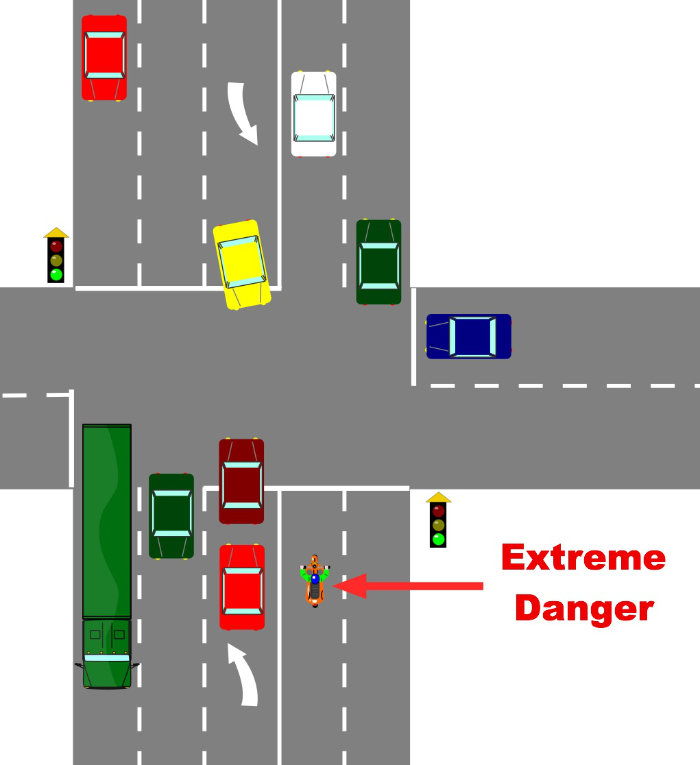 The situation outlined in the diagram is one in which you will often find yourself. You are passing through a junction with a green light where there is a filter (turning) lane on both sides of the junction. People on your side of the road are waiting to turn left, and people on the opposite lane are also waiting to turn left.

Of course, just as the drivers have very little time to see the scooter, and react, the rider is also greatly limiting his or her view and ability to react.

You should remember from previous posts that I talk about the dual needs to maintain maximum [view][5] [and ][5][visibility][5] at all times. In other words, it is crucial that we keep ourselves in a position where we gain maximum view of the hazards ahead, but it is just as crucial that we present ourselves to those hazards. These dual requirements are, fortunately, both effected in the same way.

So, the safer alternative should be obvious. It is depicted in the diagram below: 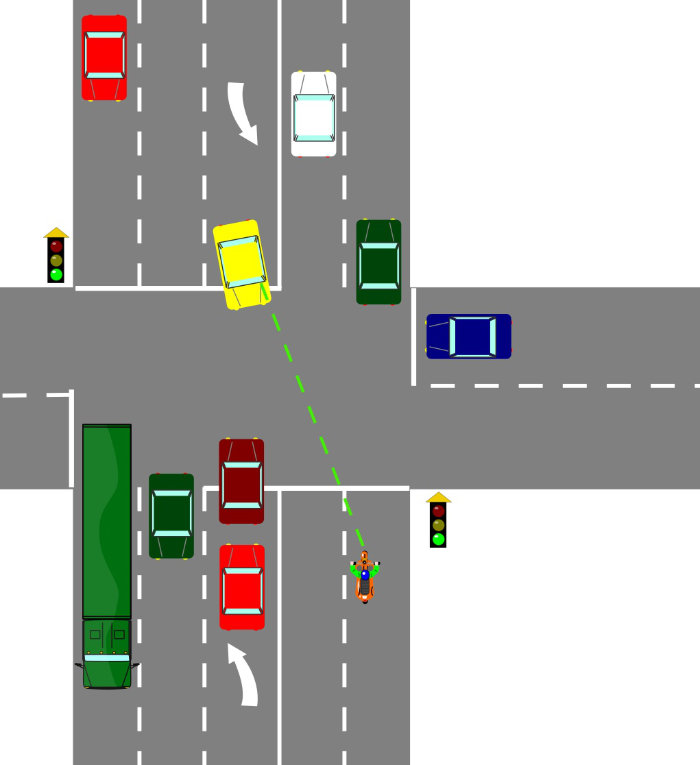 Of course, there should be no reason for you to be riding in the left lane anyway, unless you are making an imminent left turn yourself, or there is some other good reason to be there. Keep right except to pass is a rule which, sadly, is often ignored for the most bizarre reasons, but it is a rule with very good reasons nonetheless.

One final point about the second diagram: do you notice that the scooter is towards the left of his/her lane? Can you think of the reason for this? Yes, it is because of the car waiting at the junction on the right. As we are riding, we are continually assessing the hazards presented to us, planning contingencies, and creating buffer zones between us and the perceived hazards. The distance, or amount, of these buffer zones is commensurate with the severity of each hazard which we see. Clearly, the car waiting to turn left is presenting the greatest hazard, yet the car waiting at the light on his/her right is also presenting a hazard. For this reason, the rider is allowing a little buffer from that hazard as well.

A good, experienced rider will develop a sense of situations which make them uneasy; which get their danger senses tingling. The scenario outlined above — the “Traffic Light Gotcha” should get those senses screaming at you. If you cannot ensure that you are in the right lane when encountering this scenario, much extra care should be taken, and consider sounding your horn if you are not sure that the oncoming driver has seen you.

So, let’s be safe out there and, at all costs, don’t fall foul of “The Traffic Light Gotcha”.

I hope you find these posts useful. If you do, please consider supporting, while gaining access to all this information, and more, by purchasing: Proficient Scootering - The comprehensive guide to safe, efficient and enjoyable scooter riding. It's available for all e-readers and in print.
←The Print Version of “Proficient Scootering” is Here! Honda Opens Second Scooter Safety Park in Delhi→